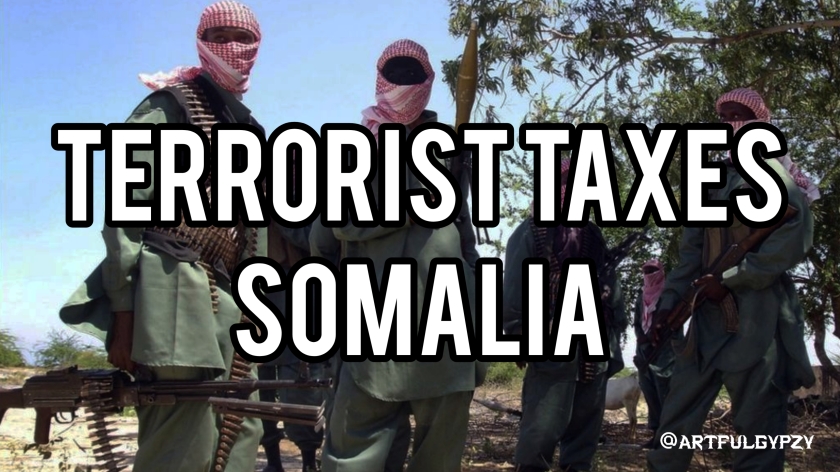 The Somali terrorist group Al-Shabaab partially funds their organization by collecting money from business within the Somali communities and by threating to beat, kill or kidnap those who disobey their orders and fail to pay this false “Islamic Taxation”. The taxation is open extortion and for one example is paid on all exported and imported commodities.

“They act as they a real government of Somalia, they see the import manifest and the traders are asked to pay a sum of money already calculated by the Al-Shabaab agents” said Ahmed who decline his full name afraid of revenge. “If you refuse to pay the extortion money the consequence is severe,” he Added.

Mogadishu merchants are afraid for their lives, have no protection and and have to deal the Al-Shabaab agents. Another businessman reported there are extremist elements in the market that detail all importation of goods to Al-Shabaab agents.

A gentleman in Mogadishu named Amiir Mohamed Adan Farah is widely believed to be running taxation business for Al-Shabaab. The Amiir (area king) holds a top leadership position in Al-Shabaab, “He controls the import and export from the port and airport of Mogadishu” said a man who nicknamed himself dhuubow.

Mr Mohamed Adan Farah was a member of secret service of former the late dictator Mohamed Siad Barre who’s government was toppled 1991 by rebel groups. He specialized in intelligence gathering and torture as he was trained by the East German STASI spy agency in the 1970’S. His family lives in Germany as refugees while he is one of the richest men in Somalia.

“Farah is responsible for the collection of extortion money for Al-Shabaab and he is the last economic solace for this dirty agency” another anonymous trader in Mogadishu.

Another player and partner of Mohamed Adan Farah in the Al-Shabaab taxation business is Ahmednur Jumale, the owner of Hormuud Telecom in Somalia. Mr Farah is a business partner of Ahmednur Ali Jumale who was put in the list of international terrorists after September 11th attack in United States in 2001. Even though he was removed from the list in 2012 he has never lost his connection to terrorist organizations.  (https://www.un.org/press/en/2012/sc10549.doc.htm)

Mr Mohamed Adan Farah travels with a Djiboutian passport in order to hide his Somali origins. Both Mr Mohamed Adan and Ahmednur Jumale hail from the Duduble Subclan which are dominate by Al-Shabaab.

Hormuud Telecom, which is headed by Ahmednur Ali Jimaleh is an ideal front company for facilitating the collection and laundering of money used by Al-Shabaab through its telephone service and the accounts it holds in “Salaam Bank”.  Money for Al-Shabaab is collected under the names “Taxes” and “Zakawat”

Its reported employees of Hormuud Telecom were directly involved in the terrorist operation on January 18, 2020 when a suicide car bombing killed four and injured at least 20 others in Afgooye on the Outskirts of the Capital, Mogadishu. The reported target for this attack was Turkish construction workers.

The question that comes to everybody’s mind is why are there so many Al-Shabaab connections lead to Hormuud Telecom and Al-Barakat group? The reality is that Hormuud group (formerly Al Barakat) and its founder, Ahmed-nur Ali Jimale is the backbone of the terrorists in the East and Horn of Africa. It’s reported by reliable sources that it is the training source for those who carry out the suicide attacks and assassinations.

This report was written by investigators from The Center for Security & Political Strategic Studies. CSPSS is a Somali think tank who’s goal is to expose the activities of criminal and terrorists groups within Somali and help to promote stability and economic progress for Somalia.

“DA” the coordinating journalist for this article “Somalia’s Terrorist Taxation & Financing” has a distinguished career in journalism that spans many years. He covered a broad array of stories from war, politics to sensitive portraits of artists. He has spent years serving the East African community in his profession with the aim of building a positive reputation for his country and people.

Thank you very much to the team that worked on this article “Somalia’s Terrorist Taxation & Financing“ it’s a great pleasure knowing and working with you!