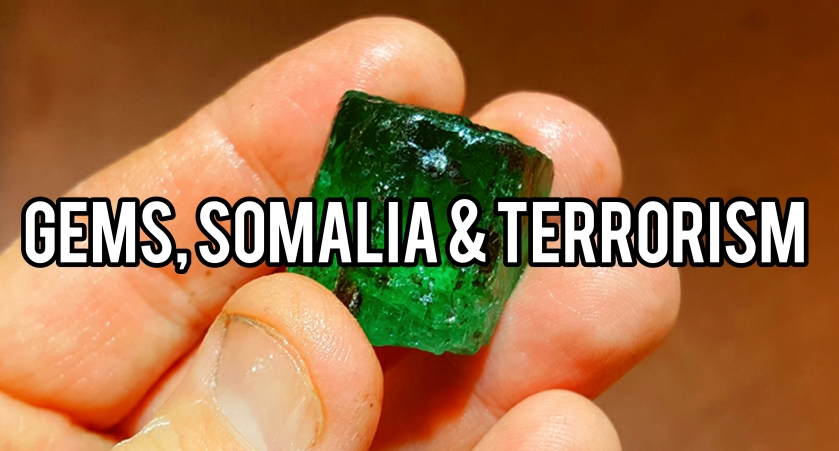 For more than a decade the eastern regions of Somalia, specifically the Puntland administration as been a hub for terrorist groups including ISIL Somalia and Al-shabaab. The Galgala Mountains which are located in the Golis Range is renowned as being the headquarters of Al-shabaab terrorists in Somalia.

The lifeline of the terrorist groups in Somalia depends on several main sources of funding including Sakawat collection; a forcible taxation from locals including business companies, international agencies and government employees and sole traders throughout Somalia.

Another important sources of income for the terrorist groups within Somalia are its natural mineral resources including gemstones. The main locations in Somalia where valuable stones available are mined are in Golis & Al-Madow mountains of Sanaag and Qandalla mountains of Bari the regions.

The types of mineral resources available in the Sanaag and Bari regions of Somalia which the terrorist groups collect include gold, diamonds, sapphires, ruby’s, emeralds and black/red soil (uranium). The sale of these minerals provides the terrorist groups with millions of dollars in funding yearly.

The Qandalla mountains of the Bari region of Somalia, is the headquarters location of ISIL fighters in Somalia led by Sheikh Abdikadir Mumin, a former senior leader of Al-shabaab militias. Sheikh Abdikadir Mumin is now leading approximately 500 ISIL fighters in Somalia who are mostly from foreign countries including Syria, Yemen, Ethiopia, Pakistan, Sudan, Kenya and Somalis from throughout the country. The lifeline of ISIL in Somalia is the money they make from the sales of minerals and gemstones that they collect in Qandalla mountains.

ISIL Somalia and Al-shabaab have professionals with the mining and gemstone knowledge, the tools used to identify and collect the different types of minerals and the machines to process them. The rough and processed gemstones are sent to Yemen and then distributed to UAE, Turkey and other trading locations where they are mixed in with certified stones. In return ISIL Somalia and Al-shabaab receives millions of dollars yearly form the illegal Somali mineral and gemstone trade.

With the funds from the illegal Somali mineral and gemstone trade it’s easy for ISIL Somalia and Al-shabaab to recruit and pay teenagers and locals to join the terrorist groups and also pay for foreign fighters to travel to Somalia from their homelands.

The funds from the illegal Somali mineral and gemstone trade also enables the terrorist groups to buy arms, ammunition, communications and logistical support they need to carry out their operations against Somali security forces, regional administrations, AMISON and foreign supporting troops.

Due to their strong financial capabilities ISIL Somalia and Al-shabaab are able to fund their campaigns of political violence in Somalia. The low economic status of the vast majority of the Somali population, the lack of transparency and democracy within the government systems, the poor state of the security and intelligence institutions enables ISIL Somalia and Al-shabaab to stay operational and challenge the current Somalia federal government and its regional administrations.

The goal of the terrorist groups in Somalia is to get a political foothold and finally leadership of the country, there is no other motivation behind their challenges and terrorist attacks against Somalia federal government, their supporting forces and the civilian population.

This report was written by investigators from The Center for Security & Political Strategic Studies. CSPSS is a Somali think tank who’s goal is to expose the activities of criminal and terrorists groups within Somali and help to promote stability and economic progress for Somalia.